Import Video into TVPaint , audio does not import

Import Video into TVPaint , audio does not import

I noticed when importing a .mov file with audio into TVPaint as a LAYER the audio does not successfully import .

If I import the .mov file as a new Project the audio does import. But I need to bring the .mov file into an existing project as a Layer.

Can someone from TVPaint please confirm this is a known bug or is this only a problem I'm having on my end ? 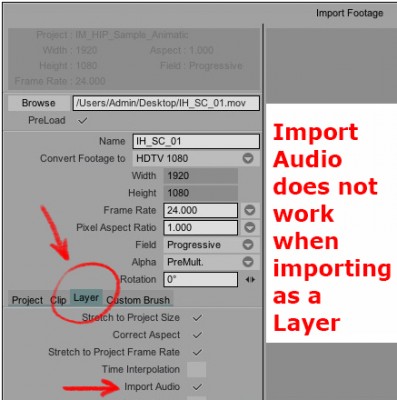 I ran into the same problem back in September 2018. Here's the thread on the topic:

Importing as a Clip sort of solves the problem for me but with some inconveniences.

Importing as a Clip sort of solves the problem for me but with some inconveniences.

Hopefully they're still working to fix this issue.

Thank you. I do remember that thread . At the time I could not duplicate the issue you mentioned , but now the same thing is happening to me and I'm mystified why it won't import the audio when trying to bring in the .mov as a Layer in an existing project.

Yes ,Importing as a clip is a good workaround most of the time , but in this case I need the .mov to import into an existing project as a layer , with the audio imported , too.
The other workaround I came up with was to extract the sound from the .mov clip (using Quicktime Pro) , then save the extracted sound as .wav , then import the .mov into my project as a layer , then import the .wav file in to reunite the sound with the images of the imported .mov. It works , but is inconvenient . So I also hope that this is something still on the developer's "To-Do" list.
MAC OS 10.12.6 , Macbook Pro Retina 15-inch, Mid 2015,
2.5 GHz Intel Core i7, 16 GB Memory , TVPaint PRO 11.0.8, 64bit -
Wacom Cintiq 21 UX - Wacom Intuos Pro 5 - driver version 6.3.20-8
Top

Would it be possible for someone on the development team to respond to this issue ? Is there a fix possible ?

In one of the other threads where this issue was mentioned , Melanie responded:

"Thank you for your feedback. We will fix this."

If there is no fix possible for this issue, then I would suggest the option which says "Import Audio" should be removed under the Layer tab , because the user will naturally assume that if such an option is shown in the Import window the audio will be imported ... it is frustrating when the audio is not imported. It would be better to not have the option listed if it does not actually work. 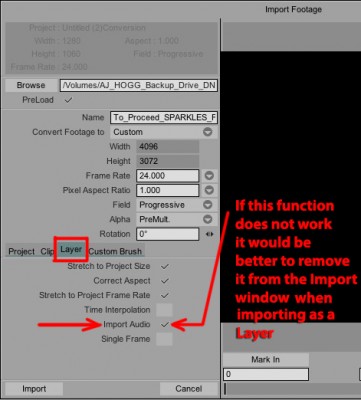 Under the Project and Clip tabs, leave the function "Import Audio" as it is now , because it does work if importing as a Project or as a Clip.