First off let me say thanks to the makers of this application, it's amazing. I recently started drawing again in the past few months and after owning the note II phone I decided to get the note 10.1 for more screen real estate. Soon after i heard of tvpaint, my first thought was it would be another generic android paint app. When i finally came to the site i realized it was more for animation and had been around a while. I decided to give it a shot. First impression is That The interface is a bit cluttered, and I'm still not sure how exactly to use it all. But I'm getting The hang of it, and like having the power at my fingertips. So far the bugs I have notice are,
If you accidentally open the on screen keyboard and then hit the keyboard minimize button it week freeze and likely lose your work. The work arounds I have found are, hit the recently opened apps icon to close the keyboard then close that menu. Or hit home then go back into tvpaint. Also it seems to be fine if you use the keyboard to adjust variables or name files as line as you hit enter after.

Another bug I have noticed is that it will randomly seem to freeze and black out the screen. Don't worry all hope is not lost, for me I was able to resume with no loss of data by hitting the tablets standby button, waiting afew seconds then hitting it again to wake it and unlocking the screen. Was able to continue where I left off.

The last bug I noticed and the most annoying to me is the fact that every time I start the app it seems to have reset to stock like it was just installed,. I customize preferences and panels, etc.. But then I have to do it over again everytime. The worst part about this is if you leave the app in the background too long and open other apps, it will Also reset. Is there a way to make it restore? Or open to a certain interface everytime?

I was also wondering if there were future plans to implement the customization of the side button on the note pen and eraser support for after market pens? Either way this app is amazing. I was going to write more input but I will later as now I'm running on fumes and have to be up for class soon. Can't wait for the official release, take my money! I will try to attach a sample of what I'm working on but like I said I'm no pro and at this point it s all for fun and practice. Thane a million I can't say enough good about this app! 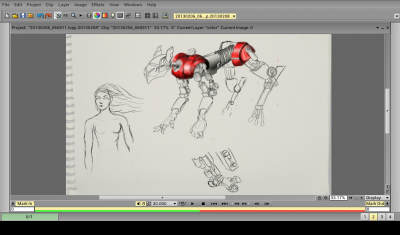 Sketched on paper took a pic with the note tablet, imported, now I'm working at it in tvpaint.