Mirrors: This is a program to switch between dual monitors on a single WACOM tablet or cintiq.

Fire up the wacswitch.exe program to begin

You might want to toss a shortcut to the wacswitch.exe into your startup shortcuts folder if you want it to run at startup. Remember to set the working directory of any shortcuts to the same directory where you installed the utility.

The first thing it should do is (hopefully) launch the control panel and bring it to the foreground. It does this by launching:

Unfortunately, every time you start up the program, you'll have to click on the tab where you remap your tablet. Maybe in later versions I'll have it automatically cycle through and find the correct tab, but it's a haphazard process right now...

Okay, you should also see a new taskbar tray icon that looks like a little wacom tablet. If you right-click that, you can access various options (and shut down the app).

If you're not on an English system, don't sweat it. I didn't forget about you guys!

Go to the OPTIONS menu and choose: Oh yes... If you have your primary #1 monitor to the right of your secondary #2 monitor, (reversed monitor layout) go to Options->Fabrice Mode and turn that option on.

Now, regardless of your language...

It will then ask you to click the wacom control panel. Then it'll search through all the visible controls on the window in an attempt to find the combobox with the "Monitor" entries and find the "Apply" button, if it exists.

If it didn't work -- remember that you have to get to the remapping tab!

All your settings are saved in the wacswitch.ini folder where you installed the program.

Hover your stylus near the right side of your tablet -- when you're in range, you'll hear a little "klunk" sound (if you have sound activated). Back off a little bit, until you hear a "plink" and then move the stylus back to the edge. If you did it right, you'll hear a "ping" and the stylus cursor will jump over to the other monitor.

To remap the stylus back to the left side, redo that same operation, except on the left side of the tablet. Try to get used to this "double-bump" movement. If it suddenly stops working, move your stylus to the center of the screen and try again.

You can also do double-bumps while dragging the stylus to drag windows and icons from one monitor to the other!

When you use the mouse to manually move the cursor to either the screen, it will also automatically remap the tablet.

* if you find yourself accidentally switching a lot, you may want to adjust the Switch Zone Width or use the Triple-Bump mode. (since v1.30)

This is a special mode that acts when the cursor is "rammed" into the side of the monitor at a high-speed, travelling horizontally. You can set the minimum speed necessary to cause it to switch and set the amount of "angular inaccuracy" allowed using: Options->Ramming Switch Velocity

I've been using my Cintiq as part of a dual-monitor setup for some time now and it's annoying to have to switch between using the stylus and the mouse every time I want to access controls on the other monitor.

Even better is the "Ramming Mode" added in version 1.30 that lets you ram the cursor at high-speed into the side of the display to switch monitors. Later versions 1.33 included "positional-jump rejection" to avoid accidental switching when the user lifts the stylus, moves it a fair distance and then brings it back down near the edge.

Anyways, I've got it working for the Cintiq, and now it also works for the Intuos and graphire tablets as well as a unified app that you just run in the background and select which tablet you have (for the first time you set up the program).

See, the program works by leaving the Wacom Control Panel open (it can be minimized in the background) and then the switching app can send the proper commands to the control panel to switch the mapping.

The utility includes various functions in the options menu to detect where the buttons and comboboxes are and to interactively set the ramming speed and switch zones.
Last edited by lemec on 14 Jan 2009, 02:01, edited 30 times in total.
(Win7x64, TVP Pro 11 32-bit)
Top

always willing to try your inventions.... 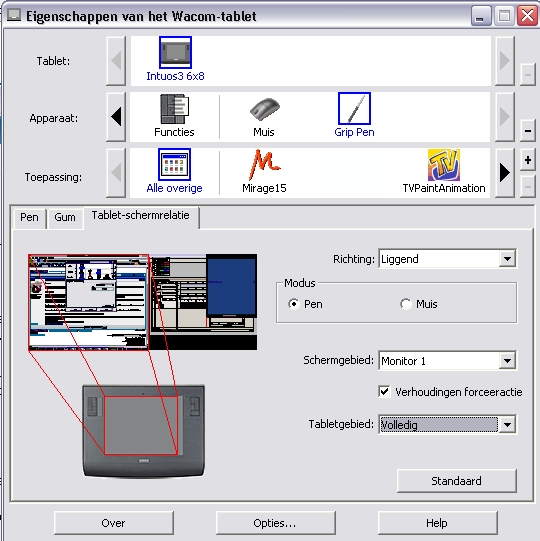 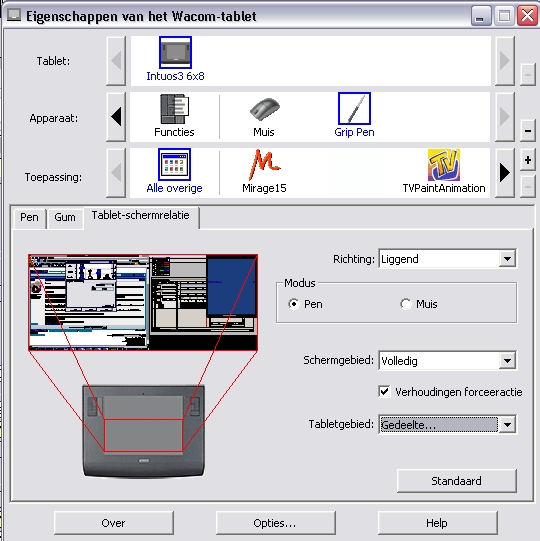 or this, which is how i work now.

The first image is perfect -- you won't have to use a stretched-wacom mapping -- this tool will make it unnecessary (I hope)...

Unfortunately I don't have a triple-monitor setup although I could probably jury-rig something if there's enough demand for it...
(Win7x64, TVP Pro 11 32-bit)
Top

mine, 2 different mappings regarding which one of my pen I use.
driver version 4.78-6 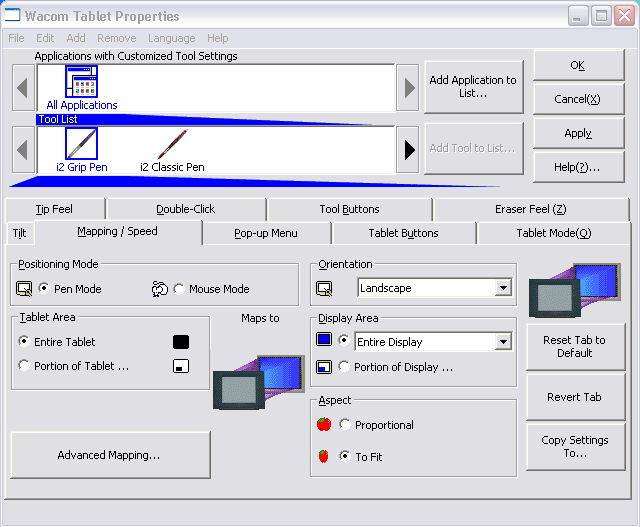 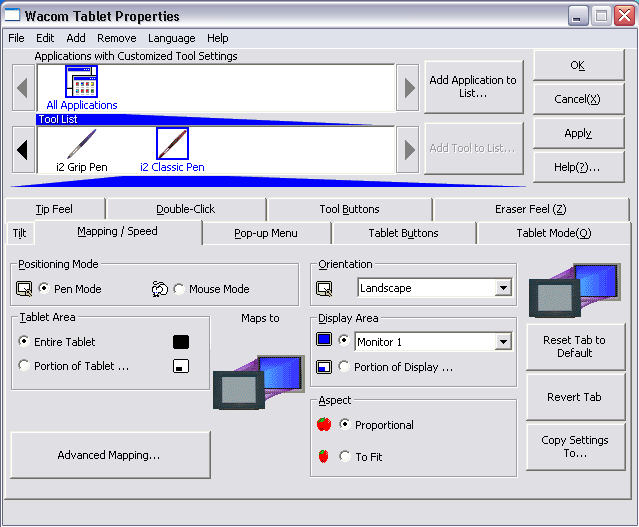 Hmm... That's right... the Intuos supports multiple pointing devices... I hadn't considered that -- and I don't believe I have any way of querying which pen is being tracked at any given time...

My tool will only affect the currently selected pen, unfortunately. The mechanism by which it works is crude, but effective. It sends a MouseWheelDown/MouseWheelUp event to the combo-box that selects which display to map to.

Okay, one other thing I hadn't considered is that you're using an older WACOM driver with a differently constructed control panel -- but don't go and upgrade just yet!

Could you run a little test?

I've followed your instructions, but in step4, hovering the pen on the tablet while changing my selection monitor1/monitor2/entire display,
my attainable area stayed mapping on monitor 1, but after a click on OK, my cursor became crazy!!!
when I moved from left to right (horizontally, it goes up to down !!!...

I've apparently modified the orientation to portrait flipped, by an oversight...?
a "revert tab" ended this devilish behavior!

... so the answer at your question is : I have to hit [Apply] to affect the new mapping.
Top

This is fantastic -- I'm getting pretty far along... sorry I gotta ask all these questions, but it's because everyone's got different wacom control windows so I'm going the extra mile and allowing users to click the controls that need to be changed (this will make the program nearly universal) and also jumping through a few hoops to make it fastidiously bullet-proof...

(same mapping for each pen) 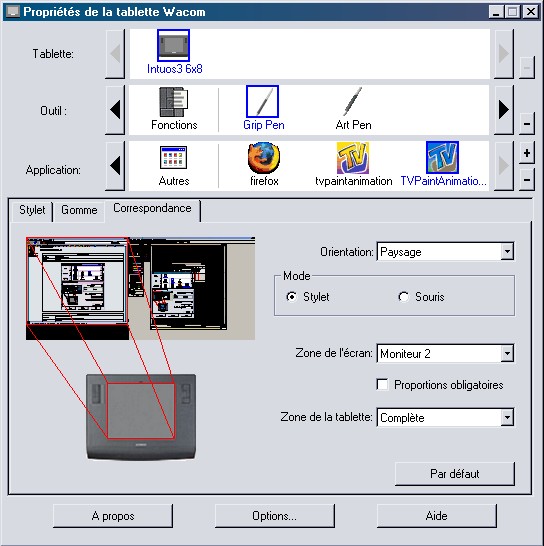 Okay, I've uploaded 1.0 of the wacom-switcher at the top of this thread...


Hover your stylus near the right side of your tablet -- when you're in range, you'll hear a little "klunk" sound (if you have sound activated). Back off a little bit, until you hear a "plink" and then move the stylus back to the edge. If you did it right, you'll hear a "ping" and the stylus cursor will jump over to the other monitor.

Maybe didn't I do the good stylus movement ?

nb : if it could help, my two screens does not have the same resolution.

The first time I quitted the wacom-switcher, I couldn't close nor change anything in the wacom driver panel.
The second time, alll was ok.

sometimes it plays sounds (often when I move the mouse), sometimes not ...

sometimes this panel appears (I don't know why) :

tell me if you need more informations. 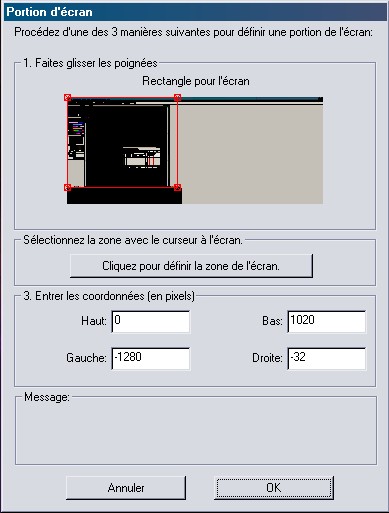 lemec wrote:Are Monitor 1 and Monitor 2 the first two choices in that comboBox?

no, the first choice (top of the list) is "entire display", then Monitor 1 and Monitor 2, in this order.
Top

Now for people with Cintiq monitors, you should go to the OPTIONS->Localize Monitor and enter "Cintiq" instead...
You will have to re-run the OPTIONS->Set Combobox utility again as this will detect the first monitor in the list...

However, if you move the cursor into the other screen using the mouse, it will automatically remap the stylus to the monitor the cursor is in!

Sorry, it does not work here.

the cursor always come back to my monitor 2.


I can hear the sounds when I move the cursor at the right edge of the monitor 1 (see below) but there is not sound when the cursor move between monitor 1 and monitor 2. 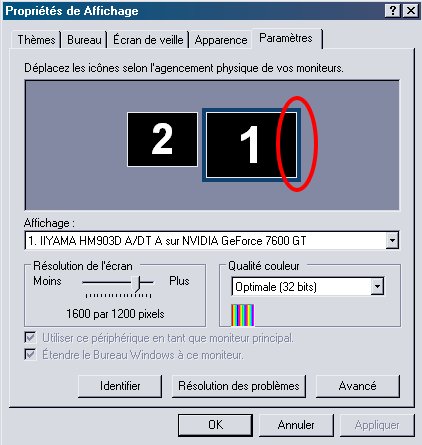