Show us your drawings and animation made with the TVPaint technology here !
Post Reply
33 posts

Robobob wrote: On "The Congress" they said it was all done in Toonboom which im sure it was for the largest part and the final cleanup but we used Tvpaint and i know another studio worked on paper.

That seems similar to the situation on the feature film "Chico & Rita" where TVPaint was used , along with Toonboom, but only Toonboom was mentioned prominently in any of the promotional material.

Robobob wrote:Don't know what happened but defenitely not something based on the software must be marketing.

indeed, in spite of regular contacts by email & during festivals, SPA even didn't ask us directy for a quotation to discuss the pricing of the TVPaint technology ... nor they tried our last version released in February with : faster 4K management, faster ink & paint process, etc ...

What follows is MY OPINION: It seems to me that SPA's abrupt change of attitude towards TVPaint (not even doing a test of the new TVPaint 11 or asking for a competitive quotation from TVPaint in light of Toonboom's offer) may partially be based on Toonboom offering them the software at a very low cost. Toonboom has deep financial backing from Canadian media conglomorate CORUS. It seems to me that their business strategy in many cases is to give away software for very low cost/no cost with the goal of eventually eliminating any competition which would be of greater benefit to them in the long run when they no longer have any viable competition from other animation software companies (smaller software companies without the financial resources of Toonboom can not compete with giving away software licenses for free or almost free). Toonboom is not new , it is well-known and well-promoted, so I am certain that SPA was well aware of Toonboom and they could have chosen to use it for the "Klaus" trailer if they thought Toonboom was better than TVPaint , but in fact they chose to use TVPaint to make the "Klaus" trailer and everyone seemed very happy with the results , so it does seem odd that they should suddenly switch over to Toonboom ...

The reason I advance this theory is because at the school where I teach it was recently announced that Toonboom will now give "free" licenses of Toonboom Harmony to the students . (of course these are not full- licenses , but are for non-commercial work and are operational only while the student is enrolled in classes ... ) TVPaint already offers a very generous educational discount price to our students , and the TVP licenses that our students purchase at the discount are perpetual full-licenses that they may continue to use after they have graduated from school for commercial work (or to do commercial work even while they are still enrolled in school). At our school the students have always had the option to use either Toonboom or TVPaint which are both installed on the school's computer's (along with the complete Adobe suite including Flash and Aftereffects which are also used for animation , and Maya , and other software) . But many students want to have their own copy of the software and for online students who don't have access to the on-campus lab computers they have always had to purchase their own software. So the discount price that TVPaint offers to our students has been very attractive. But at a certain point it becomes impossible to compete fairly against the offer of free software . Even though the "free" license that Toonboom offers to students comes with strings attached, for the poor student who is already stressed out with paying high tuition costs and other expenses associated with attending a university , the allure of the word "free" makes everything else seem hazy.
MAC OS 10.12.6 , Macbook Pro Retina 15-inch, Mid 2015,
2.5 GHz Intel Core i7, 16 GB Memory , TVPaint PRO 11.0.8, 64bit -
Wacom Cintiq 21 UX - Wacom Intuos Pro 5 - driver version 6.3.20-8
Top

Look at the Klaus poster on the TVPaint booth (CTN X 2015) !
The production goes to ToonBoom while the trailer animators are showing their love to TVPaint.

This surprising choice is only about money, not about the software quality. 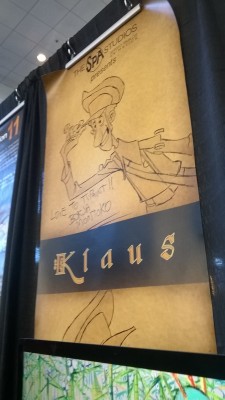 D.T. Nethery wrote:The reason I advance this theory is because at the school where I teach it was recently announced that Toonboom will now give "free" licenses of Toonboom Harmony to the students.

Good to know D.T.Nethery , I will do my next film trailer with TVPaint, maybe ToonBoom will give me free licenses to finish the whole film !

well, in the end i really hope that the tvpaint devs find a way to cook and code something even better. we already benefit from a wonderful new tool with the color and texture layer, we may find a "complex lighting" one in a near future. that would be a smart way to show toonboom and spa that we don't really care.
Top

ah ah that would be the best answer.
Will see what TVPaint dev is currently preparing !

nb : the lightning process might have been done in Nuke, I saw the software in the SPA studio Demoreel :
(at least, I can see on the image they used flat colors within Nuke) 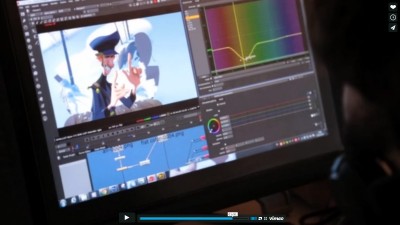 Forgot to mention I'm very happy to see that the project seems to have all the funding necessary and this shouldn't be anything against Spa Studios or Toonboom.
I highly respect what they do just tried to understand the switch that's all.
Im sure there's a reason behind it as said and if it makes the software better that's only good for the users of course.
I personally have yet to be convinced of toonboom for real traditional animation purposes.
Of course it can be done like some people still use Flash and create lovely stuff with it (Ernest and Celestine).
But I tend to miss lots of functions that I do have in tvpaint and which i really like.
I guess it's apples and oranges in the end.
Top

Of course it can be done like some people still use Flash and create lovely stuff with it (Ernest and Celestine).

Only for the animation. The rendering was made by digital graphics with their inner technology.
Top

I really don't get the excitement. Yes, it looks nice - in a Disneyesque, sugary, boasting-production-values way of nice. But what's the story? I was only mildly amused by the gags, and I can already see the direction this will be going. So, while this may be another step into making drawings look like CGI, it's nothing revolutionary story-wise.

slowtiger wrote:I really don't get the excitement. Yes, it looks nice - in a Disneyesque, sugary, boasting-production-values way of nice. But what's the story? I was only mildly amused by the gags, and I can already see the direction this will be going. So, while this may be another step into making drawings look like CGI, it's nothing revolutionary story-wise.

The whole buzz is about packaging, and I'm not interested in that.

I share your thoughts - technically it is a superb animation, but I'm not sure I see the artistic context... it might still be a good entertainment though, if the story works

I'm with soom and slowtiger on this: even if it's not my personal taste, the animation is really great. The story is maybe not that special, but you can be sure that it will get a lot of attention. And animators as future animators will look up which software was used.
Mac OS X 10.11.6 / TVP 11.0.8 PRO / Cintiq 22HD
Mac OS X 10.11.6 / TVP 11.0.8 PRO / Cintiq Companion 2
SCHWARZGRAU.COM
Top

Well it's clearly developed with hollywood production values in mind. That said i don't really know everything there is to know about the story yet so hard to judge based on just a short trailer. Of course story is paramount and there's lots of films being made nowadays where this important aspect is lacking. I personally like both indie and more commercial films if they're done well and if this project can put 2d back on the map in the states im all for it. For years now there are interesting 2d films being done in japan and europe but those are largely overlooked by hollywood (mindgame anyone?!). Perhaps this can revive traditional animation for a bit over there which isnt a bad thing imho. I agree with Schwargrau that people will indeed be interested in the technology behind it and how it can possibly be applied in different ways also.
Top

I just got the news from some TVP & TB Japan ambassador studio. Hmm.

Pablos will be at CTN Expo in Burbank, California on November 21, 2015. In a featured event, Pablos will provide a sneak peek into the art and techniques used in the Klaus teaser trailer.

The original Klaus trailer was made with TVPaint as well as proprietary tools that Pablos’s team developed in-house.

Finally, animation is not treated in the same way as live action movies. Most people will choose a movie because of the story, and eventually because it seems to be a great show (avatar, interstellar, jurassic world, etc.).

For animation, it's more complicated : first of all, because animation is still considered as a children's entertainment. Secondly, most people - who are not involved with animation industry - don't even see the difference between 2D and 3D. So, they will choose a film that appeals their eyes.

What's about Klaus ? It's made by a Spanish studio - not in the US - but with a budget by 8 or 10 times bigger than European budgets (I've been told between 40 and 45millions USD, when Song of the sea was made with 5.5millions euros). They are unkown by the large audience, so they have to prove to US industry they can be as "badass" as American productions. To do so, they bet on 2 aspects to be sure it will be a successful film :
1st : the rendering. It's 2d that looks like 3d, it's smooth, it's pretty. To make it short, it will please both children, parents and all professionals from animation industry, since their rendering is amazing (quality of animation, textures and, above all, the lightning rendering).
2nd : the story. What do we understand ? It's the story of a postman looking for a miracle to force people sending letters. It's happening in a winter and the title is Klaus -> Christmas story, so you can be sure it will be released on November / December = should be a large success.

If the story is nice (i've been told the scenario was not finished yet - don't forget this is not a trailer, but a teaser : the scenes we see won't be in the final movie), this film will be definitely a great success on all point of views : large audience and people from animation background. This is not a mystery why Toonboom offered Spa studio a "great deal they could not refuse", since they absolutely want to be part of this success.
Top

We cannot reproach them this marketing approach : when you are successful and well-known, you can then attempt more risky films. It's much harder - and almost impossible - when you are unkown.

Klaus is not Sergio Pablos' first attempt to make a movie, but this the very first time he can make it concrete.
Top
Post Reply
33 posts