Show us your drawings and animation made with the TVPaint technology here !
Post Reply
75 posts

The Holland Animation Film Festival 2016 will be held from the 16th to (and including) the 20th of March in Utrecht. Ticking Away will be having it's world premiere at this festival. Here are the screening dates and veneus for our film. We have been selected for the National as well as the International Competition programs AND our film will be among the selection in the opening night program, screening what the HAFF considers to be the highlights of the festival. 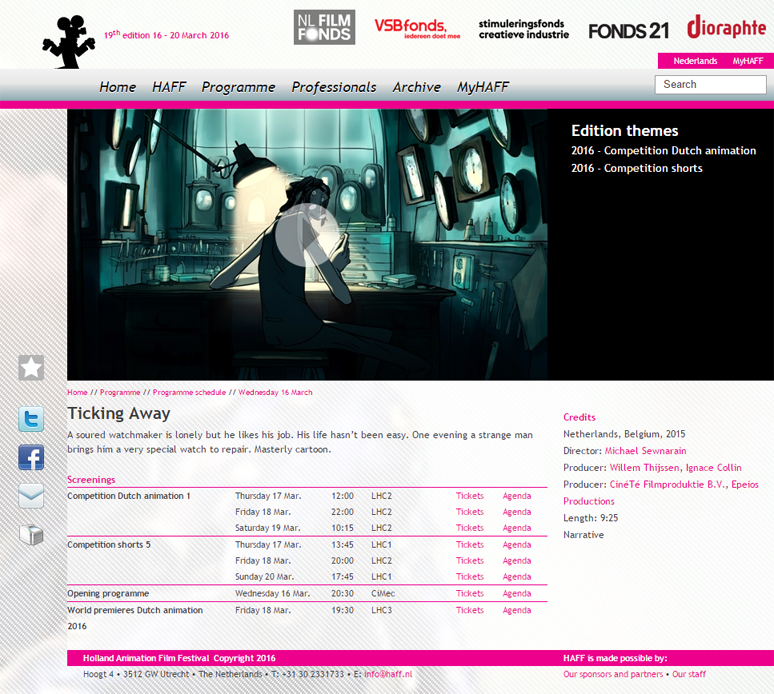 I had a great time at the Holland Animation Film Festival the last few days! Received a lot of comments, critique and feedback and met many established, as well as new, filmmakers and had many interesting conversations with the audience. We even managed to secure a nomination for a MovieZone HAFF award!


Flattering words from the jury:


"The first nominated film is … Ticking Away by Michael Sewnarain
The contrast in colours accompanied by a mesmerizing soundtrack, gives this film a weight of emotion; told as loudly as a silent film possibly could. A story so captivating, it doesn’t leave your mind the moment it fades from the screen. Truly a masterpiece with an animation style that matches its excellence."

But we didn't win, though... Better luck next time.

And the Palmares make it official!

Yes, please do keep us posted if you can!

That was gorgeous ! Bravo Sewie !

The animation is stunning, congratulations for you and Furushil

Yes, I saw. Very nice of them