General :
* An option has been added in the Preferennces panel (Display tab) regarding drag and dropping images in the timeline : * An AntiAliasing option has been added when using the Out Of Pegs feature of the Light Table.
* Peg Holes have been added in the Light Table display (for OOP) for previous and next images/instances/...
* When extracting colors form a CTG Layer, resulting layers have the same opacity as the original CTG layer.
* A Contiguous option has been added to the paint bucket, selection: magic wand, cutting tool: magic wand (works like Photoshop), alongside with a Display checkbox in the selection: magic wand.
* The Break Instance option that was in TVPaint Animation 10's Animator Panel has been added to the Handy Panel (to have it, delete your Handy Panel, it will be recreated when you relaunch TVPaint).

FX Stack :
* A new FX has been added in the Color section : Scan Cleaner Color : it is similar to the Scan Cleaner, but works with colors

Here's an example of what it does. Let's take this scanned image : 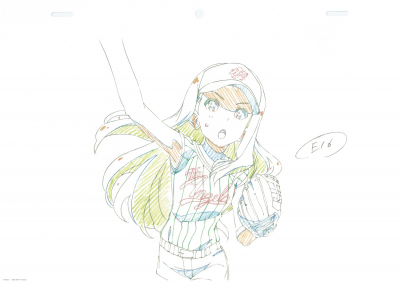 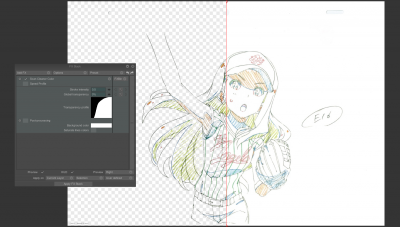 A few words about the parameters names. The names were quite difficult to choose as the mathematical formulas behind them are complicated, so here's what they do : The last three options (Post-processing) are useful for people that work with Retas in Japan.

As a consequence of this new FX, the old Scan Cleaner has been renamed into Scan Cleaner Black and White. The online documentation will be updated soon.

Shortcuts :
* It is now possible to assign keys to previous and next mark in the History Panel.

George :
* A command has been added to retrieve AND set H, S and L colors.
Example :

* A command has been added to render the camera to a new project : tv_projectrendercamera
Example :

What was fixed and/or improved in TVPaint Animation 11.0.1 ?

General
* Fixed a crash that could happen when using FX with library.
* Split clip no longer set wrong MarkIn/Out when using them.
* Frame numbers are no longer too close to the edge of the frame.
* Export Panel : when using the slate, the starting frame is now correctly remembered.
* When duplicating a layer's structure, repeat image options is correctly saved.
* Library now remembers the last used current folder when re-opening a project.
* Project Tab: Timeline view : when there is no sound, numbers are easier to read.
* FX Brush Spreading : dispersion minimum value has been set to 3.
* Warp Tool : When changing square size, the result is visible instantly (it's no longer needed to select another tool to see the changes).
* FX Stack : Modifying a key after the fifth strip no longer moves the key underneath.
* Using Guideline Assist and the play button no longer display a black box when moving the mouse.
* Color schemes values have been changed for some elements of the interface (see with a new config).
* Converting a CTG layer into an Anim layer should no longer result in strange results.
* Drawing with a custom brush that was created form a file should no longer cause a crash.
* Not setting an unique name when exporting a tvpx should no longer cause a crash.
* Mixer > Lock : when activated, it is now possible to pick up colors again (icon has been changed into a padlock)
* In the Edit Custom Brush panel, the x/2 and y/2 icons are no longer inverted.
* Fixed a bug that prevented from choosing a device input after unplugging one.
* FX Particles Generator : fixed a crash that could happen when particle life was set to 0%.
* Square size (Texturizer) should be updated when changing their size.
* Texturizer : fixed a crash that could happen when using a texture from the Library.
* Fixed a crash that could happen after Modifying and switching projects.
* [Linux] Linux RPM installer should now correctly support upgrades.
* [Android] Sound tracks are now saved in the project.

FX Stack :
* [Win64] Previewing the Inlay Texture FX should no longer cause a crash.
* It should now be easier to recognize which tab is selected in the FX Stack when using the Steel color scheme.

Flips :
* Flipping in instance mode has been improved.
* Flipping outside the limite should no longer cause an infinite loop.
* The Out Of Pegs options should now show all images, before and after the current frame.

George :
* tv_layermerge is now case-sensitive for the mode.
Si votre question a trouvé réponse, marquez votre sujet comme Résolu.
If your question has been answered, mark your topic as Solved.
Top

General :
* Full path has been added in "File > Recent files" list, and in the project view title (if the tvpp file exists).
* [Android] CTG layers should now be working !
* If you want to rename a clip, layer or fx name, double click on the name and a small window will appear below. No more blocking windows !
* Transform Tool : A Selected layers option has been added in the "Apply on" menu.
* No subpixels for position of the camera tool when moving the Camera tool's HUD (if position is 250.8, it will change in 251.8, 252.8...)
* When adding an item in the Library, its name is now the current layer's name.
* A pop-up has been added in the Demo version, warning the user that he can't save.

* New parameters have been added in the tv_layerinsertimage command :

If there is only one parameter (or none), the old behavior still works.

Shortcuts :
* A shortcut has been added for the new transform Warp.

What was fixed and/or improved in TVPaint Animation 11.0.2 ?

General
* Transform tool : handles should no longer reset themselves.
* Using sound annotations in project tab (Timeline view) should no longer cause a crash.
* Copy and pasting a layer from one project to another with the same size should no longer cause a crash.
* [Windows] TIFF export as sequence no longer export only 1 file.
* CTG Layers : Removing all sources in a long layer should no longer take a long time, even if the layer has one instance.
* [Linux] Drag'n'dropping a project file should no longer cause a "File not found" pop-up appear after the project has been loaded.
* Various improvements have been made to increase stability of CTG Layers : there should be a lot less crashes.
* Camera position is no longer shifted when cropping.
* [MacOSX-64] It is now possible to differenciate George Scripts, George Scripts files, and project files when passing them in command line (when lauhcing TVPaint Animation).
* FX Color Replacer : when using multiple Color Replacers, the second one should no longer make the color disappear.
* Double-clicking on a clip (in Project > Timeline view) should no longer cause a crash.
* [MacOSX] TVPaint Animation should now warn you if you try to overwrite a file when exporting.
* CSV Export : When exporting, original layer/instances names are kept.
* It should now be possible to export a tiff sequence over another files on a network (very specific case).
* When using Create new layer from Clipboard (in Edit > Clipboard), the newly created layer should now have the Timeline toggle present.
* Modifying and Cropping should no longer loose the Image guide reference coming from the Library.
* A bug regarding the Mark In and Mark Out refresh in the Export panel has been fixed.
* In the Handy Panel, the "+1" and "N+1" should now be behaving correctly. You should destroy the old Handy Panel and restart TVPaint Animation to have the new one.

George :
* tv_layermerge is now case-sensitive for the mode.

Hello everyone !
The time has come for TVPaint Animation 11.0.3 to finally be released !
There are a LOT of changes in the 11.0.3, and one of the most important is that :

Projects saved with v11.0.3 using CTG layers will not be able to be (fully) read with previous versions of TVPaint Animation 11 !

In this release, we fixed a (very annoying) bug related to projects made in the Professional Edition that couldn't be opened in the Standard Edition.
Unfortunately, the fix broke the compatibility with previous versions of TVPaint Animation 11.

What was fixed and/or improved in TVPaint Animation 11.0.3 ?

What was fixed and/or improved in TVPaint Animation 11.0.6 ?

Now is the time for the latest version of TVPaint Animation 11 to be released, version 11.0.8 !
As for version 11.0.6, we are skipping a number, and going straight to 11.0.8, as version 11.0.7 was distributed to a few people, for specific needs, and so weren't worth releasing to the public.

What was fixed and/or improved in TVPaint Animation 11.0.8 ?

After a long wait, TVPaint Animation 11.0.9 is ready to be released!

Here are the changes: 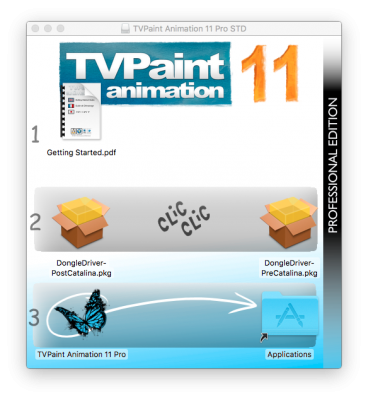 Following feedback, we've also renamed the drivers names. Instead of "SentinelProtectionInstaller", they are now named "DongleDriver-PostCatalina" and "DongleDriver-PreCatalina".

What was fixed and/or improved in TVPaint Animation 11.0.9?

General: 'Jagged lines' issue:
While we haven't managed to entirely fix the issue, we've done work to greatly reduce the loss of data and lag while drawing.
So now, when drawing, it should look more like this: 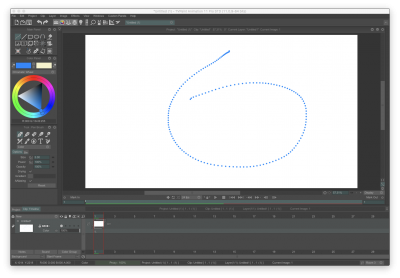 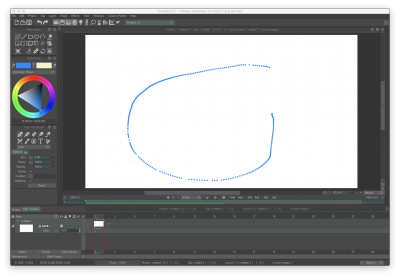 We are still working on fully getting rid of the bug, and will keep you updated.

Here is the first update of the year, bringing a few new things and a change of behaviour with the lag on macOS.

What was fixed and/or improved in TVPaint Animation 11.0.10 ?

Hello everyone!
After a long wait, TVPaint Animation 11.5 is finally there!
This is a big stepping stone for us, as we are at last getting rid of the dongles!

What was fixed and/or improved in TVPaint Animation 11.5.0?

Si votre question a trouvé réponse, marquez votre sujet comme Résolu.
If your question has been answered, mark your topic as Solved.
Top

Hello there!
TVPaint Animation 11.5.1 is now out!
This update mainly fixes issues brought with version 11.5.0, but we still added a few long-requested features.

What was fixed and/or improved in TVPaint Animation 11.5.1?