Please use this part to report bugs & errors, ask questions & "How to..."
Post Reply
18 posts

Is there a way to flip all the layers horizontaly at the same time without merging? As many animators I like to check my animation constantly by flipping (mirror).
I checked the modifyproject-panel and saw that there was a possibility to rotate the project, but not to flip it.
I can think of work arounds with the keyframer, but to check for errors now I mirror all the layers which is quite time consuming.
Top

if I understand you well, you want to have a quick mirrored preview of your animation, with all its visible layers, so that by previewing your animation this way you can get a more 'objective', or 'external' view of it?

Try the attached custom button. it duplicates the project, merges display, and zooms out (so you won't have to step away from the desk). It's not a perfect solution, as it still will take time to merge the layers in case you have many of them, but I tried it with line tests at 1600x900 pixels and was a breeze.

NOTE: importantly, you must update TVPaint to the latest release (released today) 8.5.4, as it fixes a bug that existed in the 'duplicate project' command.

i think its a nice feature idea...
to be able to mirror the project as a whole in the modify project panel.

To Zigotto:
I mean flipping spatially on the x axe
I work quite realistic, and "mirroring" the drawings helps me to find errors that I don't see anymore after working on a drawing for a while.

To Malcooning:
Thanks for your solution, but since I want to clean the animation in flipped view, I want to keep my layers without merging them.

To Tantalus:
Since you agreed with me I'll make you some coffee, and bring it to you all the three meters that seperate our desks.
Top

Tantalus wrote:i think its a nice feature idea...
to be able to mirror the project as a whole in the modify project panel.

now you can rotate the project as a whole
but there is no way to mirror it (on the x and y axis) with one click, while keeping all its layers

if it's only for preview, I think we don't really need to compute the project's frames, but just the preview rendering,
an extra option could be added in the Preview Setting panel, and we have already the place for it in the UI ...(see pict.)


hisko wrote:... but since I want to clean the animation in flipped view, I want to keep my layers without merging them.

well, in that case, to work on it in flipped position, yes, a "flip project" command would be the only way ...
(a script could do the job actually, but a built-in command would be better/faster.) 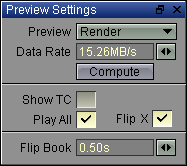 we simply need the option to flip ONLY the Zoom Window.
Once that's available, we can draw in the (flipped) Zoom Window (which should automatically update the (non-flipped) project window.
something like this? 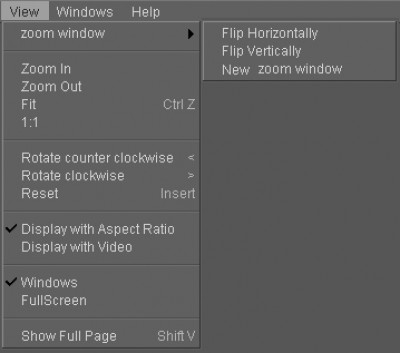 Uh, isn't he asking for something as simple as Image > Modify > Flip horisontally?

I've made my own shortcut for it (ctrl+r - used in another program as well) and then connected to my wacom. It's a blast.

Denny wrote:Uh, isn't he asking for something as simple as Image > Modify > Flip horisontally?

I've made my own shortcut for it (ctrl+r - used in another program as well) and then connected to my wacom. It's a blast.

no, he is not.
If he uses this function he'll need to flip any layer individually. He wants a flipped PREVIEW, of the whatever is displayed, and the ability to draw on top of that. but without the permanence of flipping everything for good.
Top

that would be cool !
so we would be able to have a normal preview and a flipped preview windows both opened,
and to work either on one, or on the other ...

Is there any updates in regards to this subject?

It is a very big wish for me as well. At the moment I export out my scene and flip the preview in PdPlayer, -BUT it would be very much appreciated to stay inside Tvpaint..
Top

It has been implemented a long time ago. It is a fantastic feature that I use often.
Go to View- Flip Horizontally
That's it.
Top

If I'm not wrong (I'm on the bus without à TVPaint to check this), the shortcut is ] or [ to flip horizontally.
Top

you ride on a bus without tvpaint!?

It does not work on BlackBerry phones