Please use this part to report bugs & errors, ask questions & "How to..."
Post Reply
31 posts

Re: Have any of you ever heard of/worked with LUMO?

I've only just now had time to sit down and carefully watch the videos you posted above . In the playing with shadows.mov I learned something completely new ... I never knew that it is possible to apply TWO variations of ToonShading at the same time , with each one applying shadows in different directions . I knew that I could apply more than one effect at a time using Multiple FX , but I guess I never understood that the multiple effects could be variations on the SAME effect . 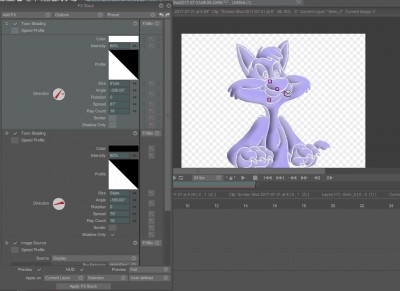 Thank you so much for recording these videos ! Learning that "secret" of the FX Stack has just made a job I'm doing much easier.

Anyway, keep in mind that in the video I disabled "shadow only" in order to see both results at the same time (or they will cancel each other...).
Applying these effects will still require 2 layers and 2 separated applications with "shadow only" enable if you want to keep shadows and lights on 2 different layers.

... or, as you know, you can apply both FX on the same layer with "shadow only" disable, but then it will be harder to make any subtle change.
Top

Holy moses! Here I was just looking for some anecdotes/info on what seemed like a lost piece of software and now here we are with a whole new list of techniques no one had thought to try out before AND a whole new feature to try out soon! Thank God for these forums am I right?
Top

Was anyone able to get to the linked locations from the Duo Cartoonist page?

When I tried them every one of them lead to: {"error":"Redirect failed"}

UsaMiKo wrote: ↑
02 Aug 2017, 18:52
Holy moses! Here I was just looking for some anecdotes/info on what seemed like a lost piece of software and now here we are with a whole new list of techniques no one had thought to try out before AND a whole new feature to try out soon! Thank God for these forums am I right?

Thank YOU for bringing that subject : it was the excellent opportunity to dive into the new Highlight FX and discover a new way to use Drop shadow FX !

When I tried them every one of them lead to: {"error":"Redirect failed"}

And if so, did you pay the $10 and receive the LUMO.psd file?

Well, the post on that blog is form 2016, so maybe links are dead. Anyway, it sounds like you can still be a "Patron" and get the PSD + explanations here : https://www.patreon.com/posts/sharing-s ... rce=tumblr
Top

Re: Have any of you ever heard of/worked with LUMO?

Highlight FX.mp4
Keep in mind that FX is not available yet, you must wait 11.0.7 release

Shouldn't I move that topic to "technical support" and rename it ?

Hi All!
It's nice to see that you are exploring ways of using TVPaint to create results similar to Lumo!
The stuff you're doing is very nice.
Back when we were making those films, Lumo was a standalone tool for the "normal generation" portion, but the lighting and compositing was performed in Shake. (This was before Nuke came in.)
I've seen other software with the lighting and compositing options, but with only limited tools for generating normals.
It's nice to see the results you have, and thank-you for crediting the "test image". (It's a drawing by the one-and-only Eric Goldberg.)

It's nice to see the results you have, and thank-you for crediting the "test image". (It's a drawing by the one-and-only Eric Goldberg.)

Thanks for dropping in to the conversation.

Your name is very familiar to me and I can see from your IMDB listing we worked on some of the same productions , but I don't know if we ever really knew each other back then. I hate to admit that those days are starting to seem kind of far away and hazy to me , hard to remember , except for the people I worked with directly in the animation and clean-up departments. I was at Disney when were in the warehouse buildings in Glendale (Airway/Flower St./Rodier Dr.) until 1995 , then briefly was at the Hat building , before transferring to the FL studio to work on Mulan.

The Lumo document you authored was very interesting to me. Thanks for ID'ing the drawing by Eric Goldberg . (when I first read through the document I guess I didn't see the part at the end where it was mentioned that the drawing was by Eric , although now that you mention it I can definitely see that now ... I used that image in my earlier post because Lumo was the topic from the original poster and it was mentioned : "You could probably do something like this in TVPaint if you manipulated the FX Stack right." so I made an attempt to show how something similar was indeed possible in TVPaint , using that image for comparison. Then Elodie added all of her additional information on how similar lighting effects could be done in TVPaint.

I'm curious: did you develop Lumo specifically for "Looney Tunes: Back in Action" or was it something you were developing anyway on your own ? Was it used in other films or commercials to duplicate that "Roger Rabbit-like" look ?

I had worked on the original Roger Rabbit (doing character clean-up) and near the end I helped out a little bit with EFX , doing inbetweens on the tones and highlights . Later I worked for Dale Baer at his studio where we animated a lot of commercials that had the "Roger Rabbit-look" (that was a hot and trendy thing for a few years) and it was a similar approach to drawing the tones and highlights (we were still in the cel era at that point , although Disney had switched over to CAPS by then ... when I was at Baer's we animated a portion of "The Prince & The Pauper" , which was the last Disney production done on cels, because as you know CAPS was so slammed trying to get "Rescuers Down Under" finished, there was no time to add P & P to the schedule . Later on , back at Disney (the FL studio) , I had the pleasure of working on the Roger Rabbit 2 test that Eric was directing. Most of that test footage was hand-drawn animation , but one scene was done in CG , in an attempt to see if the look of the squashy-stretchy hand-drawn animation could be duplicated. (for people who don't remember: this was at a time when distorting a CG character too much was usually something that was just not done because the conventional wisdom was that it would "break the rig", but Eric really pushed this idea of "breaking" the rig intentionally , to get looser, more exaggerated CG animation . It's normal nowadays to have CG characters that can move in a broad, cartoony way, but at the time (1999) that was not the norm.)


Speaking of Eric, I have a set of notes by Eric that were photocopied and passed around at Disney (and other studios) , which later turned into his book "Character Animation Crash Course" . The xeroxed notes include some material that wasn't in the book , including several pages of notes on combining animation with live-action and how to draw the tones to give the characters a "sculpted" look that makes them fit into the lighting scheme of the live-action footage. I'm posting one page from the notes that might be of interest to anyone reading this topic . I touched this up a bit in TVPaint before I uploaded it ... the xerox copy had dropped out in certain areas, and I darkened the shadow indications in blue so they would show up more clearly. Hopefully , Eric won't mind that I posted this page from his notes. (*Eric, if you happen to read this and you want me to take the image down, let me know and I will remove it , but I thought this was historically interesting and germane to the original topic under discussion here , of how these things were handled in "ye olden days" vs. how we'd do it today .) 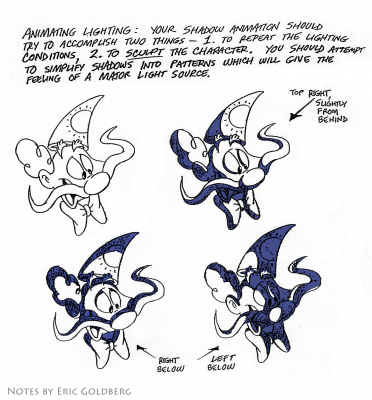 When we were doing stuff like this on paper and cels for Roger Rabbit and for the dozens of commercials I worked on , the shadow tones were one element, but we also had additional layers for highlights and intermediate tones , so the final image might have turned out something like this image: 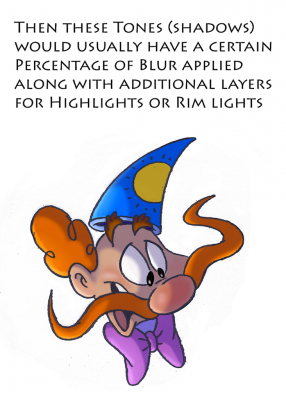 A bit off the topic, but kind of cool: I just realized that Scott worked on the "Racetrack" segment of Drew Carey's Green Screen Show , animated by Eric Goldberg , which utilized "TVPaint 7" (aka "Mirage") for coloring Eric's pen & ink animation.


Goldberg chose to work on Racetrack, because the skit seemed to have the most potential interaction between its live-action and animation.
Without pre-sketching or testing, Goldberg animated with ink directly on paper, working in a style he was comfortable with, allowing for a certain amount of boil and spontaneity. He wanted the games horse character to have the same scratchy, rubber-hose freedom of the Fleischer and Krazy Kat cartoons.

His wife, Susan, assisted as art director, and his two daughters helped with mattes. Using Shake for compositing and Mirage for ink-and-paint, Scott Johnston helped achieve the animation's watercolor look.

Thank you David for the information above ! I did not know Eric Goldberg had ever used TVPaint technology beofre. Now I will get a good excuse for talking to him when I see him in Annecy / CTN expo

Elodie wrote: ↑
16 Aug 2017, 05:17
Thank you David for the information above ! I did not know Eric Goldberg had ever used TVPaint technology beofre. Now I will get a good excuse for talking to him when I see him in Annecy / CTN expo

Well, from the linked article if seems like for that green screen show segment Eric animated entirely on paper , then his drawings were scanned and colored in Mirage by Scott Johnston, then composited with the live-actors using Shake. But I expect he was was aware of the process used for coloring in Mirage. I'd be curious to know if he has tried the more recent version of TVPaint.
MAC OS 10.12.6 , Macbook Pro Retina 15-inch, Mid 2015,
2.5 GHz Intel Core i7, 16 GB Memory , TVPaint PRO 11.0.8, 64bit -
Wacom Cintiq 21 UX - Wacom Intuos Pro 5 - driver version 6.3.20-8
Top

For anyone interested in this topic (about automatically generating shadows and highlights) here is a technical paper posted on the Walt Disney Animation Studios website which covers some of the same material , also referencing Scott Johnston's 'Lumo' software , and the work of Daniel S'ykora who made LazyBrush which became the basis for TVPaint 11's 'Color and Texture Generator' (CTG) .

This paper is also very interesting: