Differences between .png and TVPaint colours

Differences between .png and TVPaint colours

There has been a similar thread to this years ago https://tvpaint.com/forum/viewtopic.php?t=8639, but they seemed to be getting the opposite problem to me now, and I'm not sure how - or if - that was resolved then.

Keeping things constant in my tests, the screen being used is the same for all of the following - my Wacom screen. The screen capture method is also the same. The TVPaint project is 4K: 3840 x 2160.

When I draw in TVPaint on my Wacom screen using pretty pure colours, they appear a bit muted and soft, as in this image which is a screen capture of a section of the TVPaint screen 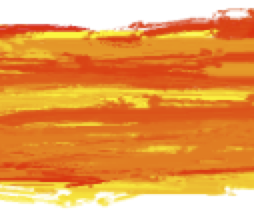 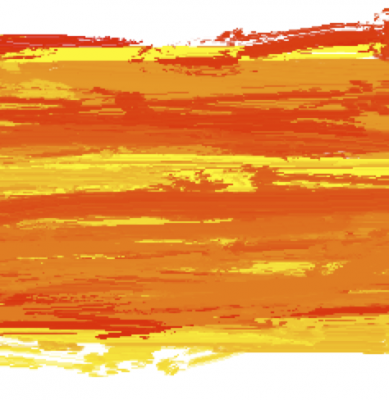 When I export that image, enlarge the .png so the drawing is the same size on the screen as the top image and do an screen capture of as close as I can get to the same area, the colours show as I would have expected them to show when in TVPaint - i.e. sharper /brighter / more intense / more pure / more saturated and as shown here 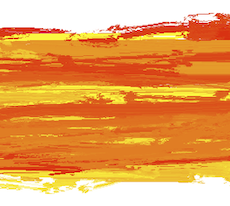 The settings used for the export were

I had noticed this issue in the past when viewing movies made from TVPaint and had thought that might have been due to me using different screens, but on testing on the same screen these issues are still present. Due to these concerns, I have calibrated my screens using i1Profiler and the above is after having done that - i.e. this is very much still a current problem for me.

Any help is gratefully appreciated - currently I am not seeing the colours I expect in TVPaint, but am in things exported from it. (This makes colour selection when in TVPaint a bit tricky!)

Looking in preferences, I can't see anything about what colour profile is being used by TVPaint. The only thing is 'locked window visibility which is set to dark - but I believe that is to do with the interface and nothing to do with the appearance of drawings.

It is almost as if I am using some sort of softening effect in TVPaint that is not preserved in exporting - but if so, I have no idea how that is happening. (My layers are simple and all I have done is draw this.)

Is the issue simply one to do with scaling of an image in TVPaint - somehow this creates differences in perceived (or actual) colour and sharpness? (But on bringing the exported png file into Moho - as an example - it appears distinctively sharper and brighter than in TVPaint at any scale.)

As is usual when I post here - I'm a bit confused currently.

This seems to be the common error of "measuring the wrong thing".

The only thing you should worry about are the RGB values of a pixel in a saved image/video, no matter which format. These should always stay the same, if not the format is not suitable.

The presentation on your monitor screen is a completely different thing. You don't choose colours to "look right on that certain monitor". You choose colours for print (that's a PS job), or for projection on a cinema screen, or for Internet. For any other medium the colours are tweaked accordingly: TV, DVD, etc. This end format is the starting point of all your colour choices, from which you go backwards to TVP.
TVP 10.0.18, Mac Pro Quadcore 3 GHz, 16 GB RAM, OS 10.11, QT 7.7.3
Top

It is also a noticeable problem with how colours appear in TVPaint vs. how the colours appear when rendered to a .mov . (export to FFMpeg .MOV , with ProRes codec)

I'm working with a student right now on finishing her film and notice the difference in the colours in the TVPaint project compared to how the .mov looks played in VLC Player.
Almost the same results when using DJV Player .

The colours appear more accurate when played back in Quicktime Player 10.5 . 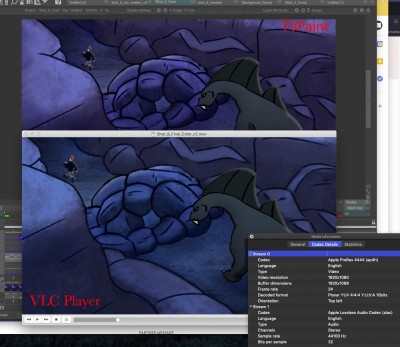 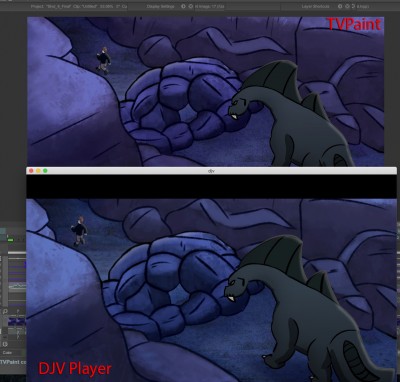 There's a much more noticeable shift in the blues in VLC and DJV players than in Quicktime Player. 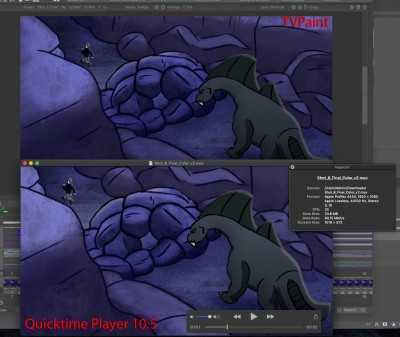 Colour is most accurately reproduced when played back in Quicktime Player 10.5.

You can export it to a single PNG and then check the colors using a picture editor (I used Gimp) to ensure they're properly exported.

When exporting into video, if you want/need to validate the exact colors then be sure to use a non-destructive (aka lossless) video codec. In TVPaint it would be MOV+PNG, MKV+PNG or MP4+PNG. Otherwise once the bits are torn-twisted-shred into compressed video, it's harder for the decoder to bring exactly the same color to the screen.
Bad, bad cow
Top

When exporting into video, if you want/need to validate the exact colors then be sure to use a non-destructive (aka lossless) video codec. In TVPaint it would be MOV+PNG, MKV+PNG or MP4+PNG. Otherwise once the bits are torn-twisted-shred into compressed video, it's harder for the decoder to bring exactly the same color to the screen.


With the compression (ProRes) I think it's partially a problem with FFMpeg's version of ProRes codec causing the "torn/twisted/shredded" bits of colour in the compressed video because I used to get much more accurate colour when exporting to Quicktime > Apple ProRes 4444 (Millions of Colors) in the older 32bits TVPaint that could still use the Apple Quicktime codecs. Interestingly, FFMpeg's "ProRes" codec appears to render the colour accurately (compared to what is seen in TVPaint 11.5) when played in Quicktime Player 10.5 aka Quicktime Player X , but not in VLC Player or DJV Player .

Here are the results comparing colour fidelity between original TVPaint compared to FFMpeg PNG Lossless in Quicktime 10.5 and the same .mov file in VLC Player :

QUICKTIME PLAYER 10.5 - (in Quicktime Player 10.5 the .MOV file with PNG Lossless compression looks close to the original colours in TVPaint) 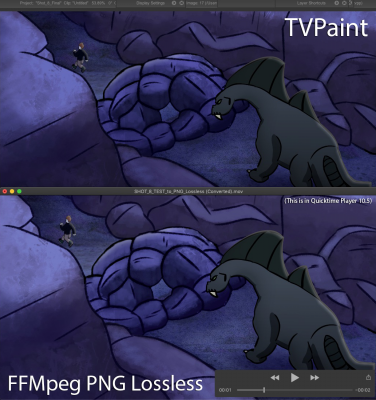 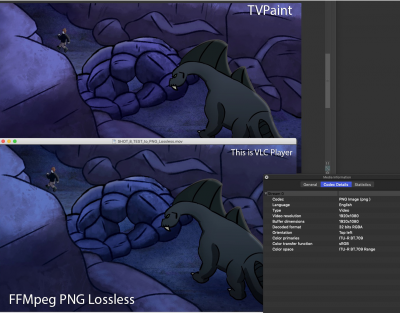 Not sure on MacOS, but I think Vlc may have brightness or gamma settings.
Bad, bad cow
Top
Post Reply
7 posts • Page 1 of 1