The feature FX Stack > KeyFramer (or other FX) > Add to the FX Bin is quite useful, except that the list of my saved Keyframer FX added to the FX Bin is now a very long , cluttered list. I know I can Export them to save them in a separate folder until such time as I want to Import them again , and I know I can delete individual FX in the Bin that I no longer need , but is there a way to Add an FX to the Bin for only a specific project , but then when I open a new project the same FX will not be saved in the FX Bin of the new project ? I don't necessarily need these saved FX in the FX Bin to be in every project , you know ? It's because there are certainly some FX I want to save to the FX Bin to re-use later, but I'm trying to cut down on the clutter in the list of saved FX in the Bin.

When I want to save an FX by Exporting it , it is annoying that the name of the FX in the Export window is "Untitled" and must be renamed , even through in the FX Bin I've already named it. So for example , let's say I have a KeyFramer FX that I've added to the FX Bin named SC_05_Slow_Pan_v2 ... I have that FX currently in the FX Stack and now I want to Export it. When I click on Export the name shows as Untitled , which means I have to retype in SC_05_Slow_Pan_v2 . This seems like it should be unnecessary, since the FX already has a name assigned in the FX Bin so Exporting the FX it should have the same name (with the option to rename it if desired).

By the way, where are these individual FX saved in the FX Bin stored ? Is it possible to delete them all at the same time , instead of deleting them one at a time ? 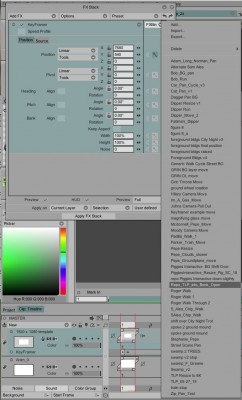