Show us your drawings and animation made with the TVPaint technology here !
Post Reply
22 posts

i post again my work because it leftovers me just shadows for all character. Please tell me the errors that you can note on my work. Thank you very much

i've post my final work in the gallery, if someone wants to see it.
Thanks
Top

i don't understand the end title

I supposed he meant when you buy cigarettes by a "non-official" way,
you know, half-priced smuggled (falsified) paquets by hands to hands at the street's corner ...
but the animation seems to be talking about "the smoke inhaled by no-smokers people" ...

btw, shouldn't it be "spawn" ?
also, I think the big text-panel at the end could have a half-transparent white BG instead of full-opaque,
to distinguish through it the end of the scene, as it is now, we have the idea that we lost the end of the anim,
and the panel coming is very rude ... maybe a short fade-in ?

my last criticism will go to the smoke animation, ... a way too speed to my eyes. 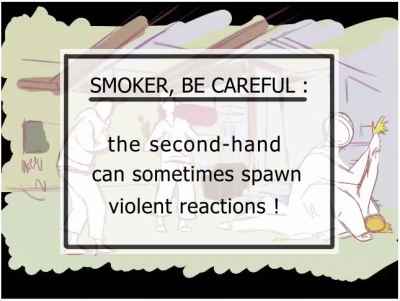 I guess the message is open for interpretation
I interpretedeteteteuu (whats the word?) it as beeing about people smoking along (second hand smoke) and then getting pissed off.
But it could mean anything really... Maybe it is better to use your native language on this one.
Top

ok, i'm verry sorry for my english which is far to be perfect, as you can notice.

I would say that a non-smoking person can have violents reactions when they meet a smoker. it was a verry easy subject but not with the good word to be understand.
I will change this in the animation, not to makes troubles for everybody.

Sorry again and thanks you to react on my
animation. As i said before, i'm student, and i
need that you review my work.
Top
Post Reply
22 posts