It could be nice to have a kind of a power break for TVPaint. Often in summer my pc is very loud when working with TVPaint, because of using a lot of processor power - even when I am drawing easy things. In the past I allowed to use only two processors (of four) for TVPaint so my PC is not becomming to hot. Maybe this "barbecue" is something like that. 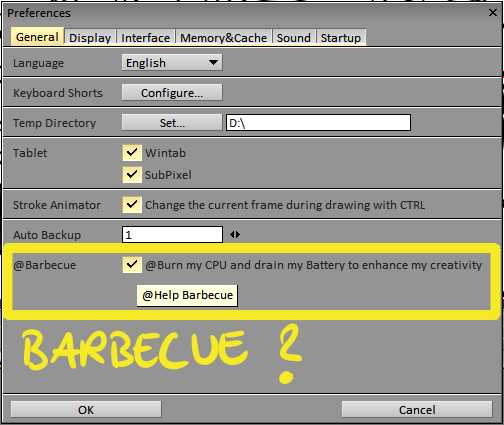 So you've been wondering about that one too!

Common ematecki, spill it out; what are you up to?

You just found the amazing function of the killing death of TVPaint !
And as its name says : you just won a new barbecue...

This is actually a new function which will allow TVPaint to make your processors work between 2 actions.
Why? Because, with new processors, some of them will go to sleep between 2 actions, when the software don't need them. And it takes a long time to wake up a processor when we need it, so the software can seem laggy when starting to draw something.

So the barbecue option allows TVPaint to keep your processors up, so it will be faster immediatly.

And the final question to answer is : Why is this option called Barbecue ?
It's because it will consume much more power than the normal use and some tablets or laptops could become hot. And the other thing is, it drains your battery faster too.
Top

Can you specify for which processors this setting is recommended? Is it only for laptops and tablets?
Michael Sewnarain - Website
Windows 10/64b - TVP11.0.8 - Pro/64b - Cintiq24HD
Top

Sewie wrote:Can you specify for which processors this setting is recommended? Is it only for laptops and tablets?

Not only for tablets and laptops.
For example I have here an AMD Quad core processor which is using the Cool'n'Quiet option from AMD. This option makes my processor go to sleep when I don't need them.
You can activate/inactivate it from the BIOS.

With the barbecue option is here to allow you to use your pc in "eco" mode and to have a TVPaint at his full potential.

There is the same option for Intel processors but with another name ( I don't know it ).
Top

It does its job for every processors.
Top

Normally, we released it on the website around Sept 24th.
Top

Oh, ok, I didn't see an announcement for it... I don't think

Yes, we didn't release any annoucement, it was just a release to fix little bugs and change little things : it didn't really deserved an announcement ^^
Top