I already animated over three years on my current film and never used X-sheets or timing charts. I always thought it will come naturally to me, if I need it. But even after all the years I never saw the need for X-sheets, since I'm animating digitally and can change things on the way. Even Peter Dodd said in a podcast that X-sheets seem like a thing from the past in digital animating.
But I got the impression timing charts could be something I really should wrap my head around, so I watched probably all tutorials on timing charts, which you can find on youtube and reread the passage about them in the Animators Survival Kit. Now I know how to read them and probably how to write them, but I still don't know if it's really worth to force them into my workflow, since it seems so unnatural.
Coming to my (maybe stupid) question: Do you still use a lot of timing charts, while animating digital? Or do you consider it something from the past?
Windows 10 20H2 / TVP 11.0.8 PRO / Cintiq 22HD
Mac OS X 10.13.6 / TVP 11.0.8 PRO / Cintiq Companion 2
SCHWARZGRAU.COM
Top

Timing charts can be VERY useful for planning, particularly where inbetweening is concerned. There is a clip of Eric Goldberg talking about how the chart, for him, is partly about knowing which order to make the drawings. If you know you're going to be slowing in to your next extreme, the primary breakdown is going to determine a lot of how all the subsidiary inbetweens will be positioned. You do the primary breakdown first, and then split the difference between that and your next inbetween, then the next, etc.

Then there's the fact that you can build a lot of overlapping action and extra interest into that primary breakdown drawing, secure in the knowledge that your other inbetweens will flesh out that movement. Again, Eric Goldberg talks about learning that from Ken Harris at Williams' studio:

I didn't used to use charts but have found that as I have tried to wrap my brain around them, my inbetweening has improved greatly. Just taking the time to THINK about how the spacing is going to go has led to a reduction in guesswork and fewer drawings that need to be redone or thrown out.
www.zoepiel.com
Top

I will join Peter's point of view : to me, traditional xsheet is something from the past that made sense when you animated on paper and had to know the exposure for every sheet.

However, it can be still useful for compositing.
Top

One other thing -- here is a video of Toniko Pantoja doing some inbetweening. In this video, he shows in great detail how his planning thought process develops into the charts he uses to inbetween. It's a long video but I learned a great deal from it:

X-sheets still serve a purpose, when I pre-plan a scene with a strong rhythm. Timing charts are a bit obsolete: they're useful if work is divided between artists, since it's an established code. But when animating all by myself I don't use them, instead I indicate spacing directly in the drawings.
TVP 10.0.18, Mac Pro Quadcore 3 GHz, 16 GB RAM, OS 10.11, QT 7.7.3
Top

slowtiger wrote: ↑
23 Mar 2017, 13:35
X-sheets still serve a purpose, when I pre-plan a scene with a strong rhythm. Timing charts are a bit obsolete: they're useful if work is divided between artists, since it's an established code. But when animating all by myself I don't use them, instead I indicate spacing directly in the drawings.

Totally agree with the value of paper X-sheets and Bar Sheets for planning work . I am friends with a Timing Director who works on some well-known animated television series (which are animated paperlessly) but he told me that he and the other timing directors still prefer to work on paper X-sheets , then have that information transferred to the digital timeline/x-sheet for the animation production that is sent overseas. It's more efficient for them. (your mileage may vary ,as the saying goes) .

Digital "X-sheet" as it exists now in TVPaint is obsolete and more of a hinderance than a help. The horizontal Timeline is better. If the vertical X-sheet in TVPaint would act like the horizontal Timeline , it would be a more useful tool.) Digital X-sheet (vertical) as it exists now in Toonboom Harmony is a very helpful tool . That doesn't make me want to switch over from TVPaint to Harmony for that alone , but it sure would be nice to have something similar in TVPaint.

Timing charts are not obsolete if you are working a traditional system where work is divided between a team of artists , from Animator to Key Assistant Animator to Assistant to Inbetweener , and actually I don't find them obsolete even when working solo (but I may be less detailed with my charts when I know that someone else does not have to interpret and follow-up my work) , however when working solo I would say to each his own production workflow . If you don't want to use charts, then don't .

In one of Aaron Blaise's recent YouTube videos (using TVPaint) I noticed that he mentioned that when he's working on his own without using an assistant that he tends NOT to chart his drawings because he can keep track of it in his head and by constantly playing back the rough animation in TVPaint , so there's an example of someone who doesn't find the charts necessary when working solo.

However, to me it's interesting that the "chart" as we know it developed during a time when most animators did NOT use an assistant , so I don't think the primary reason it developed was because of needing to divide the work in 'assembly-line' fashion. In the early days animators did all their own clean-up and inbetweens , but the charts were first drawn as arcs/paths-of-action directly on the drawings as a guide to maintaining smooth action from one pose to the next. They would draw little marks along the path-of-action to plan the spacing of the drawings ... eventually those charts migrated over to the side of the paper , and as the role of the assistant/inbetweener became the industry-standard in the late 1920's/early 1930's those charts helped to keep everyone on the same page with how the drawings should be spaced , a vital way of communicating the animator's intent through several layers of follow-up assistants.

From "The Animator's Survival Kit" a piece of history from Richard Williams, via Grim Natwick, who was in animation from almost the beginning -- 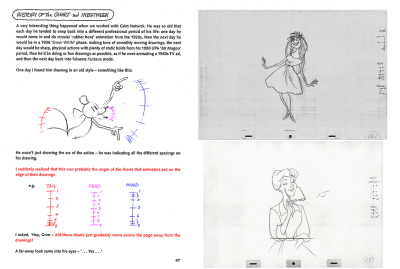 Although I don't find xsheet useful now we use digital tools, I find timing charts very useful, especially when you work in a team. On your own, I don't think this is that necessary, perhaps it depends on the complexity of the animation and how you are use to work. But I'm not sure my opinon matters since I animate 2 or three times per year, haha

Thank you all for the replies, this are some really valuable information.
Neonnoodle I was talking about exactly this video as I mentioned TimingCharts videos I saw last night.

I've already learnt a lot from It I guess.

Markus and David if I understand you correctly X-sheets probably still make sense if you're planning a big scene (maybe with a lot of audio) but not for something else?
Timing charts seem to be pretty useful If you work in an Animator-Inbetweener-environment and maybe they're still useful if a lot is going on in a shot and you need to keep track of everything, but it sounds like except of this you don't miss much not using them right?
Especially that Aaron Blaise don't use them if he is animating alone is quite interesting.
Windows 10 20H2 / TVP 11.0.8 PRO / Cintiq 22HD
Mac OS X 10.13.6 / TVP 11.0.8 PRO / Cintiq Companion 2
SCHWARZGRAU.COM
Top

After 1995 I never worked on a feature film again, and all of my commercial work is so simple that I don't need to work out any timing beforehand: there's the text, now fill the time with some movement. That's why I rarely use X-sheets nowadays.