A simple camera move. How??

Please use this part to report bugs & errors, ask questions & "How to..."
Post Reply
24 posts

David_Fine wrote:You are very right about that and this is perhaps one my biggest issues with TVPaint. The manual is lacking and outdated and vital information about how to use the program effectively needs to be garnered from places like this, which is very hard for the new user. How can a professional program be sold without it providing these very important and basic details about how to use it? I know, the team is small and we have this great forum, but really, it does shock me that there is this much discussion on the forum from seasoned users just to figure out how to do a camera move. This is very basic functionality and should just work.

I completely second this! I never used the camera-tool in TVPaint much, since it always seemed a bit clumsy to me and I always had the fear in mind to destroy my animation.
I guess there are several ways to do it, cause they evolve over time, but it would be really nice if there would only one way, which doesn't do any harm to the animation till you choose to "bake" it on the animation.
Till then you could change the camera all the time with a simple to use key-frame-system. Unfortunately I don't know much about the camera-systems in other 2D-animation programs, but I would love to see something like the camera in After Effects, just working in X and Y. I just don't know if this wouldn't affect the speed of the software too much.
Mac OS X 10.13.6 / TVP 11.0.8 PRO / Cintiq 22HD
Mac OS X 10.13.6 / TVP 11.0.8 PRO / Cintiq Companion 2
SCHWARZGRAU.COM
Top

David_Fine wrote:
As regards using the camera tool, I am still confused about how to know when to flat line in terms of the vertical position. I know you use the timeline to see where the red line is horizontally, but that does not tell you how high to raise the line to flat line when you want to hold. It seems entirely arbitrary. I'm not sure how to answer that question precisely as to "why". Maybe someone from the TVPaint Development team can chime in on this to explain it better.

All I can say is that the Camera Tool function is WYSIWYG , so when I use it there's some "eyeballing" , then fine-tuning, that goes into constructing a camera move that must Start -- Hold -- Start moving again --- Hold again -- Start moving again . In the example posted above where I was creating the whole move within a single Clip , using the Time Profile for the starts and stops (instead of ZigOtto's method of using split clips with each phase of movement rendered on a separate clip) , I set my first position "A" and last position "D" ... then I set the "B" position with a new point along the camera path (Pos. "C" would be created with the Time Profile to make a new hold position on the path between "B" and "D" by flat-lining the path. ) . I had planned the timing so that the camera would start on "A" -- holding for 12 frames before the move starts -- then truck-out to "B" from frame 13 to frame 59 and hold from frame 60 to frame 92 ... the answer to your question "Why does the line go flat at this elevation ? Why not , for instance, up here along this line ?" is that to make it hit Position "B" at frame 59 that's where I had to place the point on the path for it to hit Pos. "B" precisely at 59 ... if I moved that point up or forward it would have changed the frame when the camera had pulled out fully to Pos. "B" . Having hit my hold position at 59 I then flat-lined the path to hold from fr. 60 to fr. 92 .

Then I knew I wanted the camera to move to Position "C" (holding on the cactus) by frame 160 , hold 24 frames , then resume , so by clicking on the Time Profile path midway between "B" and "D" I dragged the new point until it had placed Position "C" at frame 160 , then I flat-lined it from fr. 160 to fr.184 for the hold . I wanted a faster move from "C" to "D" so I just clicked-and-dragged the last point to make Position "D" hit on frame 207 , and then it flat-lines to hold to the end of the scene.

As Paul noted , it's easier to do this in LINEAR mode first , then switch it over to SPLINE mode (which will temporarily mess up the flat-lined portions) but then add the extra points close to the stop and start points to restore the flatness of the flat-lined (held) portions and to be able to adjust the curve of the path to cushion in and out of the holds .

When I started I had planned where I wanted the camera to be at Pos. "A" , "B" , "C" , and "D" and how long the camera would pause at "B" and "C" (as well as the length of the holds at the start and end) , so then it was just a matter of dragging the points to hit those positions on the desired frames , "eyeballing" it and adjusting it .

It actually wasn't that difficult or time-consuming . However , as I mentioned in my previous post , I have come to the conclusion that the 'Split Clip method' is easier to manage , so then you only need to do a simple point - to - point move on each successive Clip (section) in the Scene . When the Scene is played back in continuity the camera move is seamless as it starts , holds , resumes , holds, resumes , holds .

To add a visual example to something else Paul mentioned in his previous post:


Paul Fierlinger wrote:David, it just occurred to me; do you have your view finder activated when you plot your camera move? I ask because if you did, you would see where your camera's position (view) is in time and space.

He means the Viewfinder in the Display Settings , so that your current camera position will always be clearly highlighted : 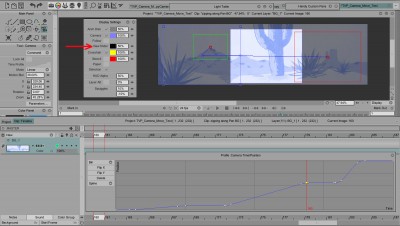 Continuing this discussion (although this should probably go in 'Feature Requests' , but oh well ...) - 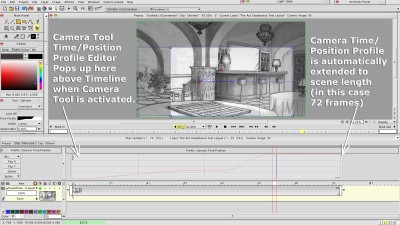 My other request is for the Time Profile Editor to have a strong vertical line every 24 frames to visually mark off seconds of time . (this would be different if the frame rate of project is set to 25 FPS , 30 FPS, or whatever ... the position of the vertical lines marking off the seconds would be tied to the project frame rate setting) .

Or maybe the Camera tool Time Profile should also be segmented to indicate individual frames , like in the Timeline Notes ? --

D.T. Nethery wrote:Continuing this discussion (although this should probably go in 'Feature Requests' , but oh well ...) -

Just continue, we are reading you

I'm wondering how it is going with improvements to the Camera Tool functions that were discussed in this thread ?

D.T. Nethery wrote:Continuing this discussion (although this should probably go in 'Feature Requests' , but oh well ...) -

Camera Time-Position above Timeline.jpg
My other request is for the Time Profile Editor to have a strong vertical line every 24 frames to visually mark off seconds of time . (this would be different if the frame rate of project is set to 25 FPS , 30 FPS, or whatever ... the position of the vertical lines marking off the seconds would be tied to the project frame rate setting) .

Vertical Line Every 24 frames.jpg
[click on images to view them larger]

Or maybe the Camera tool Time Profile should also be segmented to indicate individual frames , like in the Timeline Notes ? --

We are still working on it among other cool related features.
I feel you will really enjoy it when available.
Fabrice Debarge
Top

I got the same issue with David,and thanks to all of you kind advice,but still ,if there is a very simple camera like maya or 3ds max ,it will be very helpful for Story Board,I guess,anyway,it's very helpful,thank you!

And I wonder is there any new "cool related features." in TVPaint 11?if have,please tell us... thank you!
Top

Hassss anyone found any more documentation on how the speed curve is handled by the cpt file values or the profile value?

We're doing a camera parser to export camera motion from Maya to Tvpaint, and so far everything has worked greatly except for the speed curve.

Any help would be greatly appreciated

This is what we have so far.

As you can compare we're almost there, but the speed curve is still an issue and we haven't found any documentation for. Also the rotation speed curve seems to be calculated differently from the translation points.