Hi everyone,
I just started playing around with TVPaint (it's really fun!!) and I have a few questions. Coming from Harmony and occasionally using Opentoonz, I was wondering about certain things I couldn't find an answer to in the different forums. I may have not been very thorough, so sorry if the answers have already been given.
. What is called Instance is confusing to me. I thought it would be like in Harmony, where one drawing can be used multiple times on a Timeline but only as one drawing. Meaning that if any one drawing is changed, all the other ones update automatically thanks to the "Instance" nature of the drawing. This doesn't exist in TVPaint right? Each drawing (copy pasted in the Timeline for example) is as many drawings?
I like that in Harmony (and OpenToonz) because touch ups and coloring is far more economical and production friendly since, in an example of a 12 frame walk cycle loop of a character walking across frame, you would only have to take care of 12 drawings instead of all the frames needed to have the character leave the screen.
. Keyframer. I think I know the answer to this one, but am a bit surprised. Is there a way to animate/keyframe a layer, say translation of a character walking, without "applying" the effect? It seems weird weird to have to commit/render things at stages that may be too early to want to do that. I know that you can export an animation and import it back, but the workflow isn't really flowing. In Harmony and OpenToonz, I draw/animate the character, parent it to a peg, animate the peg, touch up the drawings, touch up the peg animation,... I have a minimal amount of drawings, and don't really have to commit to anything, meaning that I can tweak drawings and the peg's keyframes, until I deeem the animation done. You would almost want to have access to the FXStack throughout the process without having to Apply.
Anyways, thanks for reading (for those who have!) and again sorry if all this was already talked about in length somewhere else.

1) Yes, the system is a little bit different in TVPaint, for each image is considered as unique.
Too bad, I had recorded a video about it, but in French -_-"

Here is a soundless version with subtitles :

And here is the panel to use (download it and drag and drop it in TVPaint to install it) :

2) I'm not sure to understand the Keyframer part.

I think Piotr means that why do you have to render the effect to the layer? Why doesn't the effect work live, as in calculated on the go. Like what after effects is doing.

My answer to this is, that I always thought it would be easier on the software when the effect is rendered as images. (I don't know if this is the case) I admit, it seems a little bit destructive and cumbersome compared to some other software, but there are ways to make it more flowable and when you see how to use them, they're ok to work with.

Let's say if you have a character walkloop on layer 1.

You make layer 2 and use the keyframer on that layer. Pick up layer 1 as the source, animate the position and apply the effect on layer 2.

Though having said that, I'm using keyframer mostly for testing purposes and for simple stuff. If I need to do something more complicated, I would always comp that in After effects. (I also think at the moment TVpaint is developing stronger tools for TVP - AE interaction. So I presume TVps current strategy is not to focus too much on the effect side of things. But I don't know, i could be wrong. Have to see the next update

Wow! Thanks for the replies:
. Elodie: Those Panel things are awesome thank you!!! It will most definitely make my life way easier. And 4:51 AM?? I hope it wasn't my questions keeping you awake

. KariP: Thanks for clarifying what I meant! And thanks for the workaround. It does seem weird to me though (again coming from Harmony and other animation softwares). I'm not used to things being destructive. Let me try to illustrate:
Say I have a 12 frame character walk cycle. I want my character to walk across the screen for 180 frames. Am I correct to say that if I use the Keyframer, I am going to have to deal with 180 individual frames (in case of touch ups) as opposed to my initial 12? This also implies that my cycle be done and finished in terms of cleanup and color no?
This would be rarely the case in a production pipeline where you want to be able to change things quickly and easily (sometimes at the last minute) to meet the clients demands.
Unless I'm missing something, I feel that maybe another tool is missing. Like a transformation layer that could be tweaked whenever, without the need of being rendered. Live as you said.
Thanks for your answers and patience!
Windows 10 Professional 64 - 1709
TVPaint 11.0.8 64bits
Wacom MobileStudio Pro 16
Top

PiotrNikov wrote: ↑
08 Sep 2017, 06:43
me try to illustrate:
Say I have a 12 frame character walk cycle. I want my character to walk across the screen for 180 frames. Am I correct to say that if I use the Keyframer, I am going to have to deal with 180 individual frames (in case of touch ups) as opposed to my initial 12? This also implies that my cycle be done and finished in terms of cleanup and color no?


Here's something to consider when using the KeyFramer: You can have multiple projects open in TVPaint at the same time . So think in terms of PROJECT A (your 12 frame walk cycle) being the SOURCE project and PROJECT B is the "Destination" project where the walk will be rendered , showing the character walking across the screen in 180 frames.

In PROJECT B you have a layer stretched out to 180 frames . Go to the FX Stack > Motion> Keyframer > SOURCE tab ... select from Project List the Walk Cycle as the Source . Set the Post behavior to LOOP . Now go to the Position Tab and set the starting position of the Walk at frame 1 and set the keyframe ...now advance to the last frame and adjust the coordinates to the ending position of the Walk and set the keyframe . Play it back in preview mode to see if it looks right (make adjustments to the positions if needed) . When all looks correct , Select All frames on the timeline and click on Apply FX Stack. Your 12 frame walk cycle will be repeated for the entire 180 frames , making it appear as if the character is walking across the screen . But you only had to do 12 drawings. Your original 12 drawing walk cycle ("Project A") is still intact and can be re-used again or altered , but this new project, Project B , has the walk cycle rendered across 180 frames. 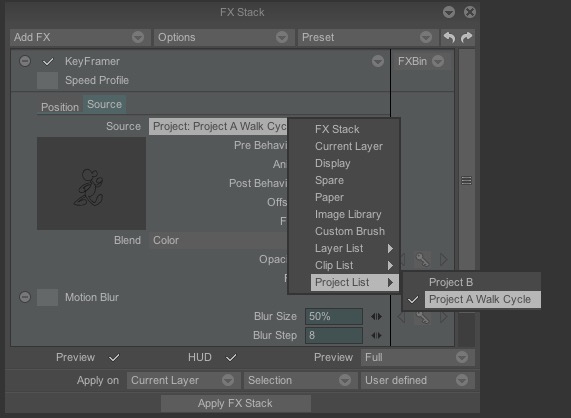 Am I correct to say that if I use the Keyframer, I am going to have to deal with 180 individual frames (in case of touch ups) as opposed to my initial 12?

If you need to do touch-ups/corrections on the walk cycle , do the touch ups on the original 12 drawings in Project A , then with those touched-up 12 drawings as your Source re-render the KeyFramer FX on a new layer in Project B (after re-rendering it you can delete the first version that was done before you did the touch-ups on the originals) . Remember that you can Name and Save a specific set of KeyFramer coordinates in the FX Bin . When it is added to the FX Bin you can always reload those exact coordinates if you need to re-render the exact same move at a later time (if the walk cycle is changed for some reason ... or say you render it first as a rough version of the walk, but then later when you have cleaned-up and colored the walk cycle you will re-render it again for the final version ... because you have the coordinates saved in the FX Bin it is easy to re-apply those same coordinates to the now cleaned-up and colored "Project A" walk cycle in your "Project B" rendered walk project .) . 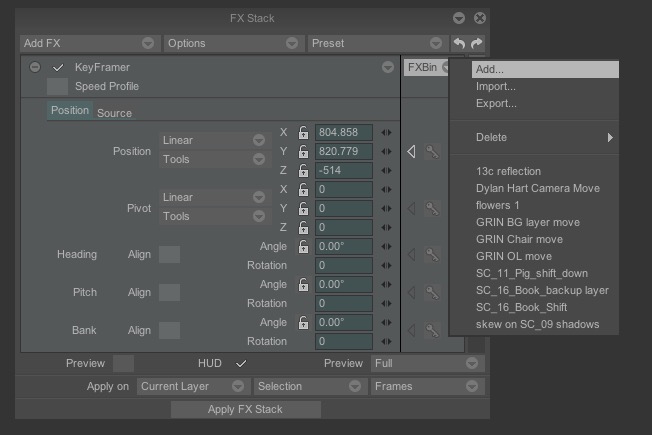 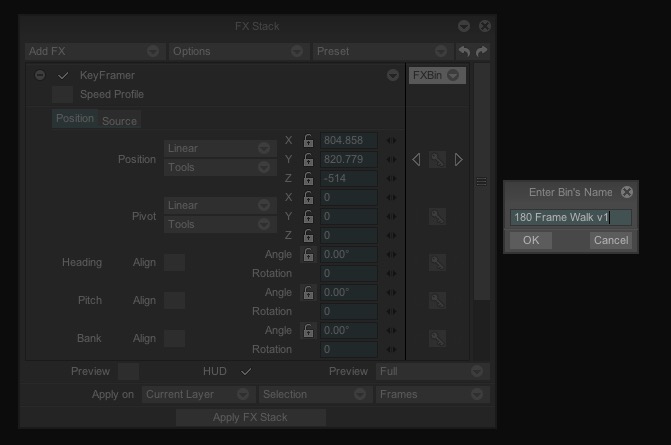 Thanks for taking the time to explain all this D.T. Nethery!
It's all very clear, and I'm going to test it asap.
It doesn't feel as straight forward as it should be though. It would be great to be able to do everything in context in one project. What happens in a case where I want a character cycle for some frames, have him stop and act for a moment, and leave the scene with the same walk cycle that he walked in?
It's a braintwister. Especially if you're on a schedule.
Let me test and come back here, probably with even more question

Well, in that case you need to animate that character's transition from walk to stop (and more action) and then to walk again anyway. And it's totally possible to use the Keyframer for only a range of frames, and for its source to start from a certain frame (offset), so if you really need this you could prepare cycles and everything else in one project and import it via Keyframer into another project in whatever combination you like.
TVP 10.0.18, Mac Pro Quadcore 3 GHz, 16 GB RAM, OS 10.11, QT 7.7.3
Top

And 4:51 AM?? I hope it wasn't my questions keeping you awake

Haha no ! That's my usual "wake up" time, but for now I'm in Canada and it was like 11PM when I answered.